What Is Suni Lee's Net Worth?​

Sunisa "Suni" Lee is an American artistic gymnast who has a net worth of $3 million. At the 2020 Summer Olympics, Lee was the women's artistic individual all-around champion, and she won a bronze medal in the uneven bars. Suni has been a member of the U.S. women's national gymnastics team six times, and she was part of the teams that won gold medals at the 2019 World Championships in Stuttgart, Germany, and the 2020 Summer Olympics in Tokyo, Japan. In 2021, Lee competed on ABC's "Dancing with the Stars," and she and her partner Sasha Farber finished in fifth place. That year "Time" magazine included Suni on its list of the world's most influential people, and in 2022, she was nominated for two ESPY Awards, Female Athlete and U.S. Female Olympian.

Suni Lee was born Sunisa Phabsomphou on March 9, 2003, in Saint Paul, Minnesota. Her mother, Yeev Thoj, is a healthcare worker who emigrated from Laos as a child. From the time Suni was 2 years old, Yeev's longtime partner, John Lee, helped raise her, and Lee considers him to be her father. Suni has three half-siblings, Lucky, Evionn, and Noah, and Evionn has competed in regional artistic gymnastics competitions. At the age of 6, Lee began taking gymnastics lessons at the Midwest Gymnastics Center, and she started competing the following year, winning the all-around at a Minnesota state meet. When she was 8 years old, Suni jumped three levels, and at age 11, she qualified for the elite program. She was trained by Punnarith Koy until the age of 12. 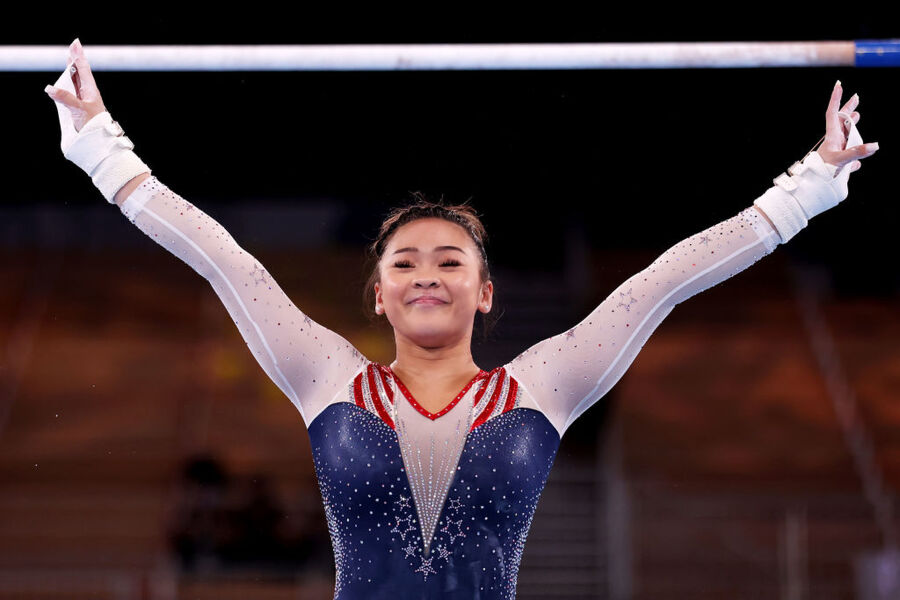 In August 2019, a few days before Suni's first senior USA Gymnastics National Championships, her father was paralyzed from the waist down after falling off a ladder. In 2020, Lee's aunt and uncle both passed away after contracting COVID-19. Suni said of the tragedies, "I fought off the negative thoughts and the sadness, and just focused. Now I feel like I'm maybe tougher because of it. No, not maybe. I am tougher because of it." In November 2021, Lee said that when she was in Los Angeles for "Dancing with the Stars," she and her friends were pepper-sprayed by a group of people in a car who screamed racist slurs at them and told them to "go back to where they came from." Lee spoke to "Pop Sugar" about the disturbing incident, stating, "I was so mad, but there was nothing I could do or control because they skirted off. I didn't do anything to them, and having the reputation, it's so hard because I didn't want to do anything that could get me into trouble. I just let it happen." In early 2022, Suni's relationship with USC Trojans football player Jaylin Smith was the subject of hateful comments from members of the Hmong-American community who did not like the fact that she was dating someone of a different race.