What is Sara Evans's Net Worth?​

Sara Evans is an American country singer and songwriter who has a net worth of $16 million. Sara Evans signed with RCA Nashville and released her debut "Three Chords and the Truth" in 1997. She released "No Place That Far" in 1998 and had a hit with the title track. The album was certified Gold. Her third album "Born to Fly" was released in 2000. The title song was a #1 hit on the Hot Country Songs chart. Born to Fly was certified double Platinum. She was the Video of the Year award and was nominated for six other awards by the Country Music Association in 2001. She released the albums "Restless" in 2003, "Real Fine Place" in 2005, "Stronger" in 2011, and "Slow Me Down" in 2014. She had #1 singles with "Suds in the Bucket" and "A Real Fine Place to Start". She became the first country music singer on ABC's Dancing with the Stars in 2006.

Evans was born on February 5, 1971 in Boonville, Missouri to parents Pat and Jack Evans. She is one of seven children. The family grew up on a 400-acre livestock and crop farm. Her mother also worked as a school bus drive and her father worked at the Columbia Daily Tribune newspaper. Evans suffered an accident when she was eight years old as she was hit by a car when crossing the street. She suffered a concussion and severe injury to her leg.

Evans' musical talent was apparent from a young age. Her mother put her and her siblings in a band which they called The Evans Family Band. Evans performed lead vocals and later learned to play the guitar, mandolin, and drums. The band performed at various events and fairs and helped Evans develop her musical prowess. She graduated from high school in 1989 and attended Central Methodist University for one semester before leaving to pursue a full time career in music.

Evans moved to Nashville where she started waiting tables. She briefly moved to Oregon after getting married but returned to Nashville in the mid-1990s, where she got a job as a demo singer. Nashville songwriter Harlan Howard was impressed by her voice and got her an audition in front of RCA executive Joe Galante. She was offered a recording contract on the same day as her audition and she signed a seven-album deal with the label.

Evans then began working on her first album. She moved to Los Angeles, California to record "Three Chords and the Truth," which was released in July of 1997 on RCA. While the album received positive critical reviews for its traditional country sound, it was not commercially successful and peaked at number 56 on the Billboard albums chart.

Determined to experience more commercial success, Evans began recording her second studio album with the intent to focus on a slightly more contemporary sound. She released the album "No Place That Far" in October of 1998. The album was more successful than her first, peaking at number 11 on the Billboard country albums chart. The album's second single, the title track of the album, reached the number one spot on the Billboard country songs chart.

Evans then began working on her third studio album, "Born to Fly." The album was released in October of 2000 and became Evans's breakout album. It was certified double platinum after it sold over two million copies in the United States and it peaked at number six on the Billboard country albums chart. The album's title track also reached the number one spot on the Billboard country singles chart. Due to her massive success, Evans was invited to join Reba McEntire, Martina McBride, Jamie O'Neal, and Carolyn Dawn Johnson on the all-women headlining Girls Night Out Tour in 2001. 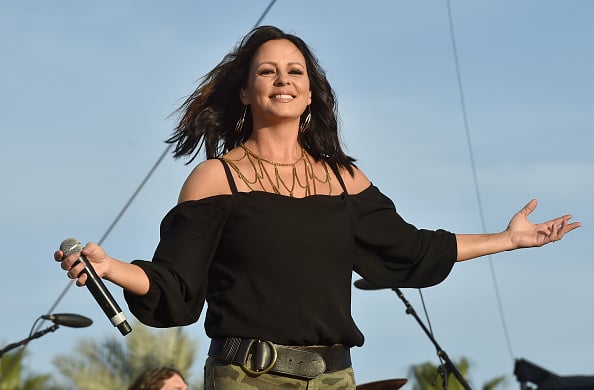 
Building on her success, Evans released her fourth album in 2003 entitled "Restless." The album was certified platinum in the United States and a number of the album's singles reached top spots on the Billboard charts. She then released her fifth album, "Real Fine Place," in October of 2005. The album became her first to take the top spot on the Billboard albums chart. She also won the Top Female Vocalist award from the Academy of Country Music.

By 2006, Evans was dominating country music. She also appeared on "Dancing with the Stars" and released her first compilation album, "Greatest Hits." In 2009, she released an EP of Christmas songs called "I'll Be Home for Christmas."

In 2010, Evans began working with author Rachel Hauck to write "The Sweet By and By" and "Softly and Tenderly," two books that focus on Christian themes. After a break from recording new music, she returned to writing songs and co-wrote the track "A Little Bit Stronger," which topped the Hot Country Songs chart in 2011. She also released her sixth album, "Stronger," which was later certified gold in the United States. She continued working on new music in between touring, releasing the album "Slow Me Down" in 2014.

After spending her entire career with the RCA label, she left in 2016. She announced she had signed with Sugar Hill Records six months later. She released the album "Words" in 2017 followed by "Copy That" in 2020.

Evans married her first husband, Craig Schelske, in 1993. Evans gave birth to their first child in 1999, a son named Avery Jack. She then had a daughter, Olivia Margaret, in 2003. Evans filed for divorce from Schelske in 2006, accusing him of verbal abuse, infidelity, alcoholism, and unemployment, among other claims. Schelske accused Evans of having multiple affairs with fellow musicians, including Kenny Chesney. Their divorce was finalized in September of 2007.

Evans met her second husband, Jay Barker, through her marriage counselor. The couple married in June of 2008 in Tennessee. The family settled near Birmingham, Alabama where they lived for a number of years before returning to Nashville in 2019. In January of 2022, Barker was arrested for aggravated assault after he allegedly tried to hit Evans in a car. Evans had previously filed for divorce from Barker.

Evans has been open about her various troubles with panic attacks and anxiety. She discusses some of her personal stories in her 2020 memoir, "Born to Fly: A Memoir."