What is Johnny Weir's Net Worth and Salary?​

Weir is known for his flamboyant style both on and off the ice. During the 2014 Sochi Olympics, Johnny's over-the-top outfits caused quite a stir and were seen as a "middle finger" at Vladimir Putin's anti-homosexual agenda. Weir himself came out as gay in 2011 in response to hearing about a rash of gay teen suicides around the country. Though he has not technically won an Olympic medal, he is still a very popular personality in figure skating. He did win bronze at the 2008 World Figure Skating Championship. He is also a two time bronze medalist at the Grand Prix Finals. He was the world junior champion in 2001 and the US national champion three years in a row from 2004 – 2006.

Because of his celebrity status, Johnny has been featured on numerous TV shows and reality programs. Along with Tara Lipinski, Johnny is now a regular commentator for skating competitions including the Olympics. He and Tara were the main commentators for the Sochi games in 2014 and the PyeongChang games in 2018. The pair also serve as "fashion and lifestyle experts" at the Kentucky Derby every year and "cultural correspondents" at the summer Olympics.

Johnny Weir was born on July 2, 1984 in Coatesville, Pennsylvania to John Sr. and Patti, both of whom worked at a nuclear power plant. He has a younger brother named Brian. Growing up, Weir was raised in central Pennsylvania in the state's Amish-dominated area. He was an accomplished equestrian early on in life, winning a number of riding competitions. To better be able to train, he moved with his family to New Britain, Connecticut. Weir subsequently began figure skating when he was 12, prompting the family to move again, this time to Newark, Delaware. There, Weir attended Newark High School. After graduating in 2002, he enrolled at the University of Delaware, but did not complete his degree.

In his first year of competitive figure skating in 1997, Weir competed in both singles and pair skating events. Paired with Jodi Rudden, he won the South Atlantic Regionals and qualified for the Junior Olympics. Weir went on to win several regional competitions in single skating in the novice division. In the 1998-99 season, he advanced to the junior level. Weir subsequently won the Junior Eastern Sectionals in both 1999 and 2000; he then claimed the gold medal at the World Junior Championships in 2001.

Weir had his best year yet in 2004, winning his first national title at the US Figure Skating Championships. In the process, he became the youngest male skater, at 19, to win the title since Todd Eldredge 13 years prior. Weir went on to compete for the first time in the World Figure Skating Championships, where he came in fifth. In 2005, he won the NHK Trophy, his first Grand Prix title, and also claimed the Trophee Bompard. Moreover, Weir successfully defended his US Nationals title. He won a third consecutive US Nationals title in 2006, making him the first male skater to win that many in a row since Brian Boitano nearly 20 years earlier. 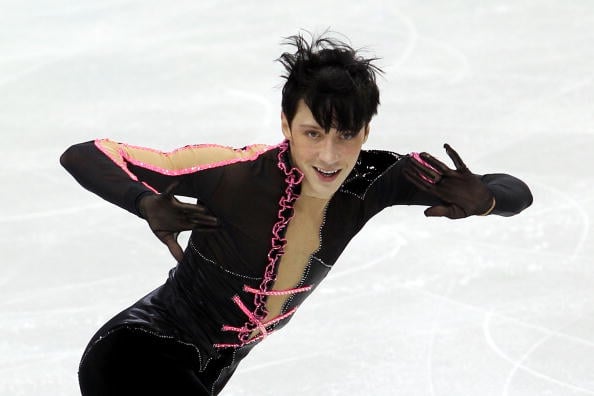 Weir competed at his first Winter Olympics in 2006 in Turin, Italy. The only American male skater to be in medal contention following the short program, he ended up finishing in fifth place. Weir returned to the Olympics in 2010 in Vancouver, Canada with a sixth-place finish.

Among his other career highlights on the ice, Weir took home the bronze medal at Skate Canada in 2006; won the gold medal at the Cup of Russia in 2007; and claimed the bronze at the 2009 World Figure Skating Championship. He also came in second at the 2008 US Nationals and third at the 2010 Nationals. After taking time off over the 2010-11 and 2011-12 season, Weir returned to compete at the Finlandia Trophy and Rostelecom Cup. However, injuries ultimately impeded his comeback. Weir retired from competitive figure skating in late 2013.

Beyond skating, Weir has been hired as a correspondent for a number of other major televised events, including the Academy Awards, the National Dog Show, and the Kentucky Derby, at all of which he appeared alongside Tara Lipinski. Weir also served as a correspondent at the 2016 Summer Olympics in Rio de Janeiro, Brazil.

In 2011, Weir came out as gay through his autobiography "Welcome to My World." That summer, he served as the grand marshal at the Los Angeles Pride Parade. In early 2012, Weir married his boyfriend Victor Voronov. The couple eventually divorced in 2015.

Weir's sexuality has been inseparable from his skating, sartorial, and conversational styles. During his skating years, his flamboyant dress and frequent outspokenness caused controversy with judges, spectators, and the US Figure Skating governing body. However, others praised his glitzy showmanship and demonstrative behavior as markers of his unique personality.