What was Dennis Wilson's Net Worth?​

Dennis Wilson was a singer, songwriter, and musician, best known for co-founding and serving as the drummer of the rock band the Beach Boys. At the peak of his life, Dennis Wilson had a net worth equal to $20 million after adjusting for inflation. Unfortunately Dennis died nearly broke living on a boat in Marina Del Rey, California.

He recorded twenty four studio albums with the band and released one critically acclaimed solo album. The Beach Boys have been referred to as America's Band. They have had 36 songs reach the Top 40 in the U.S. They have sold over 100 million records worldwide and were ranked by Rolling Stone as the 12th Greatest Artist of All Time in 2004. The band was inducted into the Rock and Roll Hall of Fame in 1988. Dennis was the middle brother of Carl and Brian Wilson. Dennis was the only regular surfer in the Beach Boys.

Dennis was also known for his association with the Manson Family cult, as well as for his co-starring role in the 1971 film "Two-Lane Blacktop." Amid struggles with alcohol and hard drugs later in his life, Wilson drowned in 1983 at the age of 39. At the time of his death, Dennis was nearly broke. He had been banned from Beach Boys events and was forced out of his house. He even had to sell a beloved yacht to help cover basic bills.

Dennis Wilson was born on December 4, 1944 in Inglewood, California as the second son of Murry and Audree. With his older brother Brian Wilson and his younger brother Carl, he grew up in Hawthorne. Dennis was known for his rambunctious behavior, and along with his brothers was often beaten by his father. He was considered the black sheep of the family, and frequently immured himself in his bedroom listening to music. When he was 14, Dennis started playing the piano; at the age of 16, he began taking drum lessons in high school.

Success with the Beach Boys​

Evolving from a band known as the Pendletones, the Beach Boys officially formed in late 1961. Originally, the group was composed of brothers Brian, Dennis, and Carl, their cousin Mike Love, and their friend Al Jardine. Meanwhile, Wilson patriarch Murry served as the manager. The band had its first hit with its debut record, "Surfin'," which was a regional success on the West Coast. Despite the group's Southern California surfer image, however, Dennis was the only member of the Beach Boys who actually rode the waves. The band continued to cultivate its sun-baked, easygoing surfer vibe with the albums "Surfin' Safari," "Surfin' U.S.A.," and "Surfer Girl."

Infrequently given the chance to sing on the Beach Boys' early records, Dennis was provided greater vocal opportunities on the 1965 album "The Beach Boys Today!" He sang "Do You Wanna Dance?" and "In the Back of My Mind." The year after this, the Beach Boys released their groundbreaking album "Pet Sounds"; by this point, Dennis had begun using LSD. Later, in 1968, the group released the first major composition written by Dennis, "Little Bird." The song and its A-side were featured on the album "Friends." Subsequently, Dennis contributed the songs "Be with Me" and "All I Want to Do" to the 1969 album "20/20." After this, the popularity of the Beach Boys declined significantly. However, Dennis continued writing songs for the band, including "Forever," "Slip On Through," "Got to Know the Woman," and "It's About Time."

In 1977, Dennis Wilson released his debut studio album as a solo artist, "Pacific Ocean Blue." The album was well received by critics. Wilson intended to follow it up with "Bambu," on which he collaborated with Beach Boys keyboardist Carli Muñoz. However, "Bambu" was ultimately aborted due to a lack of financing. In 2008, some tracks from the album were included as bonus songs on the original CD issue of "Pacific Ocean Blue." 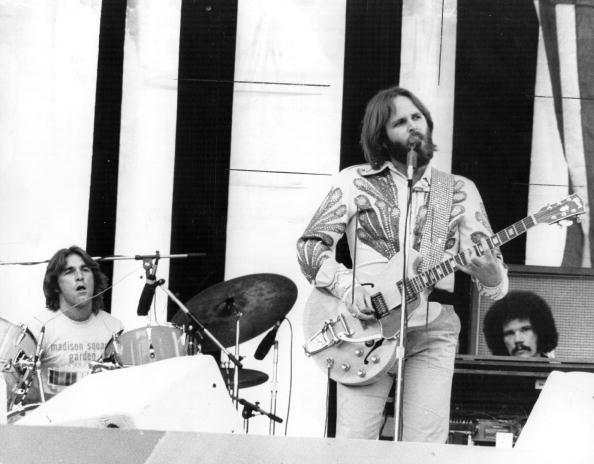 Beyond his music career, Wilson co-starred alongside James Taylor, Warren Oates, and Laurie Bird in Monte Hellman's 1971 road movie "Two-Lane Blacktop." In the film, he plays a character called the Mechanic, one of a pair of street racers who drift around the United States challenging others to impromptu drag races.

Connection to the Manson Family​

In April of 1968, Wilson picked up two female hitchhikers in Malibu while driving a Ferrari Daytona. Just days later, he spotted them again and gave them another ride. The girls told Wilson that they had a guru named Charles Manson; when Wilson returned to his home later in the night, he was greeted by Manson in his driveway and a dozen of Manson Family cult members on his premises. Fascinated by the cult, Wilson became friends with Manson, and housed members of the Family at his residence. However, after some of Wilson's cars were destroyed by the Family, he began distancing himself from Manson. Things only got worse, with the Family robbing Wilson of his household possessions. Following the peak of the Manson Family murders in August of 1969, Manson visited Wilson and demanded his money. Wilson reportedly received many death threats from the Family over the ensuing years.

Wilson wed his first wife, Carole Freedman, in 1965; the pair had a daughter named Jennifer, as well as a son named Scott from Freedman's prior relationship. They divorced in 1967. Subsequently, Wilson married Barbara Charren, with whom he had two sons named Michael and Carl. After their divorce, Wilson was twice married and divorced to actress Karen Lamm. He then dated Christine McVie of Fleetwood Mac from 1979 to 1982.

By the late 70s, Wilson had descended into heavy alcohol, cocaine, and heroin use. After giving his final performance in late 1983, he was given an ultimatum by his Beach Boys band mates to check into a rehabilitation facility or be forbidden from performing live with them again. Wilson subsequently entered a therapy center in Arizona; he then checked into a hospital in Santa Monica, California. Following a violent altercation, he checked into a different hospital. He then discharged himself and began drinking again immediately. On December 28, 1983, Wilson drowned while diving in Marina Del Rey after a day of heavy drinking. Early the next year, his body was buried at sea by the US Coast Guard.