What Is Chloe Kim's Net Worth?​

Chloe Kim is an American snowboarder and Olympic gold medalist who has a net worth of $2 million. Chloe Kim came to the world's attention in 2018 as a participant of the Winter Olympics in Pyeongchang, South Korea. Competing in Pyeongchang is especially notable for Chloe because she is a second-generation Korean-American and still has family in South Korea. Prior to entering the Olympics, Kim was a four-time X-Games gold medalist and the first American woman to earn a gold medal in the snowboarding event at the Winter Youth Olympics. She won a gold medal in the Women's Halfpipe event at the 2018 and 2022 Winter Olympics, and at the age of 17, she became the youngest woman to win an Olympic gold medal in snowboarding. Chloe has won the halfpipe event at the Winter Olympics, World Championships, Winter X Games, and Winter Youth Olympics and was the first person to win the halfpipe title at all four events.

Kim played an Angel Recruit in the 2019 film "Charlie's Angels" and lent her voice to 2020's "Scooby-Doo and Guess Who?," and she has appeared on television shows such as "Live with Kelly and Ryan," "Double Dare," "Ridiculousness," "Sesame Street," "Kevin Hart's Cold as Balls," "Jimmy Kimmel Live!," "The Late Late Show with James Corden," "The Kelly Clarkson Show," and "The Ellen DeGeneres Show." In 2018, she graced the cover of "Sports Illustrated" and appeared on a Kellogg's Corn Flakes box (setting a record for "fastest-selling cereal box in Kellogg Company history"), and Mattel released a Chloe Kim Shero Barbie. In 2020, she competed on the Fox reality series "The Masked Singer" and made it to the semi-finals.

Chloe Kim was born Chloe Sun Kim on April 23, 2000, in Long Beach, California. Her mother, Boran Yun Kim, and father, Jong Jin Kim, are from South Korea, and Jong Jin emigrated to the U.S. with just $800 in the early '80s. He took minimum-wage jobs and earned a degree in manufacturing engineering technology from El Camino College; he later quit his engineering job in order to focus on Chloe's snowboarding career. Kim grew up in Torrance, and she has two older sisters, Tracy and Erica. Jong Jin began teaching Chloe to snowboard when she was 4 years old at the Mountain High resort in L.A. County's San Gabriel Mountains, and she started competing two years later as part of Team Mountain High. When she was in third and fourth grade, Kim attended school in Switzerland, where her aunt lived, and two years later, she returned to California. Every weekend, Jong Jin drove Chloe to Mammoth Mountain, a drive that took more than five hours. Kim is fluent in Korean, French, and English, and she attended Dana Middle School. In 2013, Chloe joined the U.S. Snowboarding Team.

Kim won a silver medal in the superpipe event at the 2014 Winter X Games, and the following year, the 14-year-old took home the gold. Chloe was the youngest person to win a gold medal at the Winter X Games until 13-year-old skier Kelly Sildaru won for the slopestyle event in 2016. When Kim competed in the 2016 Winter X Games, she became the first two-time gold medalist under the age of 16 and the first athlete to win two gold medals back-to-back. At the 2016 U.S. Snowboarding Grand Prix, Chloe became the first woman in a snowboarding competition to complete back-to-back 1080 spins, and she got a perfect score. 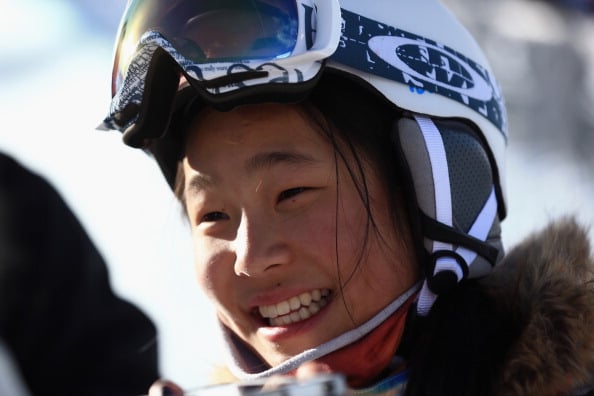 
In 2016, Kim also became the first American woman to take home the gold in the Winter Youth Olympic Games' snowboarding event, and her score was the highest snowboarding score in the history of the games at the time. She was chosen to be Team USA's flag bearer for the 2016 Winter Youth Olympic Games' Opening Ceremony, and she earned an ESPY Award nomination for Best Breakthrough Athlete that year. At the 2018 Winter Olympics in Pyeongchang, Chloe won a gold medal in the Women's Halfpipe event and became the youngest woman to complete two consecutive 1080-degree spins at the Olympics. Kim won the gold again at the 2022 Winter Olympics in Beijing, making her the first female snowboarder to win two gold medals in the halfpipe event back-to-back.

Chloe has regularly received hateful and racist messages since the age of 13, and she has said that after the 2014 Winter X Games, "People belittled my accomplishment because I was Asian. There were messages in my DMs telling me to go back to China and to stop taking medals away from the white American girls on the team. I was so proud of my accomplishment, but instead I was sobbing in bed next to my mom, asking her, 'Why are people being so mean because I'm Asian?'" Kim has spoken out about the rise of anti-Asian violence since the beginning of the COVID-19 pandemic, telling ESPN.com, "Every time my parents step out the door, I think maybe I won't see them again or maybe I will get a call from the hospital that they were attacked. I'm scared all the time." She added, "I never go anywhere by myself unless it's for a quick appointment or I know the place is crowded. I have Tasers, pepper spray, a knife. If I go outside to walk my dog or go to the grocery store, my fanny pack has all three of those in it and my hand never leaves my side."