What is Bobby McFerrin's Net Worth?​

Bobby McFerrin is an American singer who has a net worth of $5 million. Bobby McFerrin is best known for his 1988 hit song "Don't Worry, Be Happy." "Don't Worry, Be Happy" was a No. 1 U.S. pop hit in 1988 and won Song of the Year and Record of the Year Grammys. It was featured in the Tom Cruise movie "Cocktail". McFerrin is known for his unique vocal techniques, including giving the illusion of polyphony by singing alongside the melody, using percussive effects and making large jumps in pitch. He is a ten-time Grammy Award winner.

McFerrin was born on March 11, 1950 in Manhattan, New York City. He is the song of Robert McFerrin, an operatic baritone singer, and Sara Copper, who was also a singer. McFerrin grew up influenced by his parents' love of music and began singing and training his voice from a young age. He attended Cathedral High School in Los Angeles and then enrolled at Cerritos College before transferring to the University of Illinois Springfield. He finally ended up at California State University.

After college, McFerrin was interested in pursuing a professional career in music but did not release any music until his self-titled album in 1982. In the years preceding that, McFerrin worked to develop his own musical style and spent at least two years trying not to listen to any other music or artists in order to avoid sounding like him. However, he was influenced to some extent by Keith Jarrett's work on the piano, particularly his solo improvised piano concerts. McFerrin hoped to attempt something similar vocally. When he released his 1984 album, it was the first solo vocal jazz album recorded with no accompaniment or overdubbing.

After releasing his album, McFerrin began to perform live and also collaborated with other artists. In 1984, he performed as the sixth member of Herbie Hancock's VSOP II onstage at the Playboy Jazz Festival. In 1986, he voiced a character in "Santa Bear's First Christmas" and also performed the theme song for the opening credits of the fourth season of "The Cosby Show."

McFerrin's biggest early success came in 1988 when he recorded and released the song "Don't Worry, Be Happy." The song became a worldwide hit. However, McFerrin had a challenging relationship with the tune, as it was used as the official campaign song for George H. W. Bush's 1988 U.S. presidential campaign without McFerrin's permission. It also changed the way the he was viewed as a performer, which he did not like. He eventually dropped the song from his performance repertoire.

The following year, in 1989, McFerrin composed and performed music for the Pixar short film "Knick Knack." He also formed a ten-person "Voicestra" which he featured on his 1990 album "Medicine Music" and in the score to the 1989 Oscar-winning documentary "Common Threads: Stories from the Quilt." In 1993, McFerrin sang the theme song for the comedy film "Son of the Pink Panther." 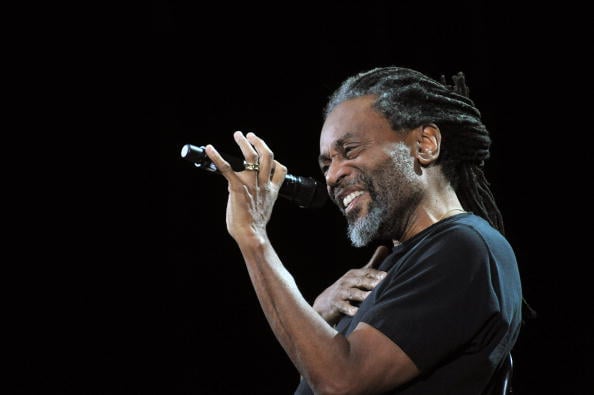 
McFerrin's vocal style and technique is unique. He often switches between modal and falsetto registers to create sort of polyphonic effect and usually performs both the melody and accompanying parts of songs himself. He also is able to create various percussive effects with his voice and mouth and often incorporates beating on his chest.

Outside of his own vocal career, McFerrin also served as creative char of the Saint Paul Chamber Orchestra. He often tours as a guest conductor for various symphony orchestras throughout the United States and the world including the San Francisco Symphony, the New York Philharmonic, the Cleveland Orchestra, the Detroit Symphony Orchestra, the London Philharmonic, and the Vienna Philharmonic. While working with orchestras, he sometimes incorporates his own vocal improvisations and includes audience participation. In the late 1990s, he toured a concert version of "Porgy and Bess." This was in large part to honor his father who had sang the role for Sidney Poitier in the 1959 film version and to ensure that the score retained a strong sense of its jazz roots.

Additionally, McFerrin participates in various music education programs around the United States. He often makes volunteer appearances as a guest music teacher and lecturer at public schools. In 2009, McFerrin and psychologist Daniel Levitin hosted "The Music Instinct," a two-hour documentary produced by PBS that was based on Levitin's best-selling book, "This is Your Brain on Music." They also later appeared together at the World Science Festival to discuss the topic.

McFerrin's gift for music and contribution to the arts have been honored in numerous ways over the years. In July of 2003, he was awarded an Honorary Doctorate of Music from Berklee College of Music during the Urban Jazz Festival, where he had conducted two days of clinics. In May of 2018, McFerrin was given a lifetime achievement award at the A Cappella Music Awards. The following year, in August of 2020, he was honored with the National Endowment for the Arts Jazz Masters award.

McFerrin married Debbie Green in 1975. Together they have three children – Taylor, Madison, and Jevon. Taylor and Madison both went on to become musicians while Jevon became an actor.

A strange rumor that McFerrin committed suicide circulated around 1992. The false story spread through the news and many attributed its popularity to the irony in that idea that a person made famous for singing about being happy may have been suffering from depression in real life. However, McFerrin debunked the rumor.

In 2001 Bobby and his wife bought an 8,000 square foot mansion in Philadelphia. The home dated to the 1860s and was surrounded by more than 300 acres of protected forest. They listed this home for sale in March 2016 for $4 million and ultimately sold the home in August 2019 for $2.25 million. Here's a video tour of that property:

Renovating homes is a passion for Debbie McFerrin. She has renovated at least five properties that they've bought and flipped for a profit.